We are only what we do, not who we say we are.
Although the company’s composition has changed quite a bit since its humble beginnings on a barbecue table in 1996, the focus has not. Be good to people. Work hard. Do business with people you like and like you in return. Have fun. When you do something you like and have passion for it, people notice and want to be a part of it.

Located conveniently in the NW suburbs of Chicago just off major expressways, we can quickly get just about anywhere. The facilities are spectacular and the technology employed is nothing short of cutting edge. We utilize the same technologies that we sell and test everything in our setting before placing it into production.
SEE MORE OF OUR SPACE

Mr. Kolssak is continually humbled by the great ideas and direction of the people who make up TURNkey IT. David is the principal of the company and is responsible for the corporate focus, culture and strategic direction.

In 1992, David Kolssak came home after college and worked in his father’s family business (Kolssak Funeral Home). He learned a lot in the first few months applying what he’d learned and what business was really like. David soon realized that a computer network was necessary for even a small going concern such as this. During the process of installing that network, Mr. Kolssak found a necessity that was not being fulfilled in the business world at that time. This entrepreneur wanted to fill this void and thus began the idea of TURNkey IT. It was not easy in the beginning trying to convince people to hire a 26 year old kid in 1996 with little experience. But somehow it happened one client at a time. Interestingly, some of those first customers are still with TURNkey IT today. Although Mr. Kolssak has grown older, his customers will tell you that he is honest, hardworking and clever. Slowly adding customers one by one and always having the notion to do unto others as you would do unto yourself, the company grew. Today, TURNkey IT has hundreds of small business customers and values every relationship just as the first day the business began.

David likes to cultivate relationships and is very demanding of himself and those who work for him. He also likes to work in an environment that is uncommon in the business world. Rather than cold cubes and florescent lighting, the offices are comfortable, “homey”, tasteful and many people use desks that raise up so they can stand.

Mr. Kolssak graduated from Purdue University’s Krannert School of Management with a BS in Management. Although much of the education he received doesn’t really apply to everyday life, the quantitative, analytic approach to business has helped his conceptual mind be more practical. David is a proud member of Sigma Chi Fraternity where he learned how to do all of those things mom told you not to. However, it is at this fraternity where he was introduced to the love of his life – Melissa. David likes to say that he got married first and dated Melissa for 10 years until having children. Mr. Kolssak is blessed with his two sons, David II and Chase. His boys also understand the importance of doing your very best while working hard and always being respectful of others.

People who work at TURNkey IT are treated as part of Mr. Kolssak’s family as there are regular team building activities to foster the growth, compassion and prosperity of the company. His door is always open.

Mr. Kolssak is continually humbled by the great ideas and direction that the people who make up TURNkey. The company has plans to continue growing while staying focused on the small business market. Mr. Kolssak also continues to find people that are dynamic and on top of the technology that continues to change every day. The most important thing is to do what you love and love what you do. Mr. Kolssak does just that. 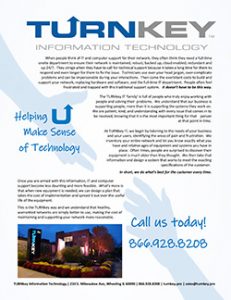